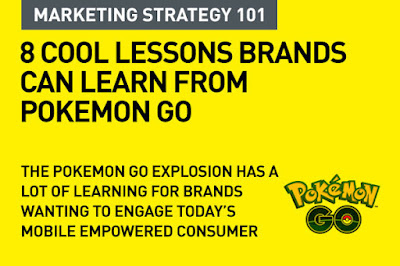 Pokemon Go is a worldwide phenomenon. The success of the Pokemon Go app is a multi-point lesson for brands in our new mobile empowered age. Here are some things every brand can learn from Pokemon Go.

Average users of Pokemon Go are spending twice as much of time engaged than with other mobile apps like Snapchat. The AR (augmented reality) mobile-only game has pushed the boundaries of the traditional app user experience. Brands today can apply the same principles to create engaging apps that instantly resonate with their target audience.


What is Pokemon Go

It is the biggest mobile game ever. The object of the game is to walk around the real world to find and ‘catch’ Pokemon on your phone. Through the use of GPS technology, the player can see digital Pokemons in their surrounding area, walk up to the creature, and use the camera on their smartphone (which overlays the Pokemon on the real world) to capture it.

Here are some points to learn for brands from Pokemon Go:


1. Mobile only, mobile first of course

Pokemon Go is mobile only. It is made for an authentic mobile experience and not re-purposed from a console or computer game. The creators thought mobile first, and made it mobile centric for today's mobile focused consumer.


2. Use native functionality of the device

Apps today need to utilize and maximize the native functionality of the device to enrich and enhance the user experience.  Pokemon GO uses GPS technology and the smartphone’s camera to create a contextual user experience that’s only possible through a mobile app. Using a mobile's built in capabilities simplify but enhance the experience. You can use code scanners, camera, GPS, beacon-triggers, voice and more.

3. Focus on the consumer

Pokemon Go is totally consumer focused. It is simple and revolves around a need for the consumer to be entertained and engaged at the same time. This is based on insight. It resolves a need and delivers a hugely entertaining solution.
READ HOW: Customer Insights is your First Step in Digital Marketing

Pokemon Go augmented reality (AR) to reinvent an old popular game for a modern user experience. Pokemon GO is able to create interactive experiences that keep users engaged via the device's capabilities. Users are spending more minutes per day in Pokemon GO than in other popular mobile apps like Facebook – it is the interactivity, user involvement and entertainment that makes it huge.
Unlike VR, augmented reality doesn’t require expensive hardware – so brands can make use of the device already in the hands of all their customers. And make it totally interactive and immersive. That's what makes it a stand out app.

Pokemon Go is social both inherently and as well it has a huge social bearing physically. It is bringing people together in the physical world where they bond over a common interest. It is an open world and often collabortaive as people instantly share their exploits and wins. It is bringing people together in the real world – something that most 'digital' experiences lack. It is perfect as sharing material for social networks.

The key to success for any app is high visibility and talkability. Groups of people hunting Pokemon, eyes glued to their phones. They are highly visible and obvious because they are disrupting the normal course of life – in an interesting way. This is arousing both curiosity and interest, prompting non Pokemon folks to to find out more, read about it, ask about it – all exponentially increasing awareness.

And the biggest contributor to extreme 'virality' is that it is grabbing the headlines on social networks and the daily news.

Pokemon Go is a social media phenomenon because users are sharing their experiences. There have been more than 6 million Twitter mentions in less than a week since launch. Users are sharing on their social networks their experiences on the app as the little creatures pop up in unexpected places. They are being both competitive as well as generous with hints and how-tos. That 's Pokemon's huge social win. 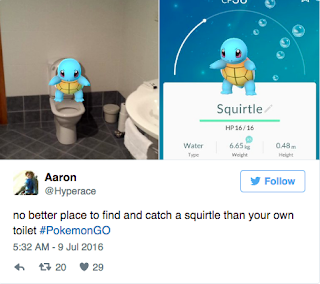 Pokemon Go is compelling, engaging and immersive as an experience. The app uses real world video (via the camera) and combines it with a fascinating and interactive AR layer. This is storytelling in a whole new way. And that's a great lesson for every brand out there.
And that's the basics of digital marketing strategy. That's 101. Please share this post with your friends and colleagues today... And do comment if you feel you want to add to this.

How to create a winning mobile App for your Brand

10 Critical Elements you must get right for Mobile Marketing Success

Nice points you have made. The success of any app is based on interactivity. Most business driven apps fail because they fail to provide interactivity and interesting features. Brands should really learn these lessons.

it is very usefull blog,

Increase response rates and return on investment by selecting our highly targeted and verified Australia B2B Email Lists of prospects from our business.