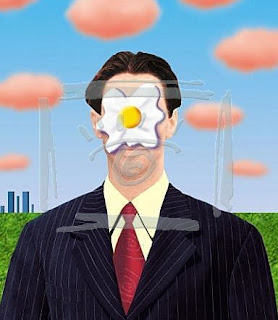 In the George Orwell book Nineteen Eighty-Four, an Unperson is someone who has been vaporized. Gone missing, moved, erased. Made invisible, banished. So good.

Since having read the interesting Time magazine Person of the Year issue – featuring Mark Zuckerberg – I've been toying with appointing my own. Our our own. A collective vote from round here for a hero. But then we thought (all my personalities, I'm split you know) that it would be much, much more fun to do a UnPerson. Someone who we do not wish existed. Someone who we could erase, vaporize. So, here goes... The 2010 UnPerson of the Year.

The 2010 UnPerson recognition goes to someone very similar to Zuckerberg in some ways. Some one who's very visible in media. Someone who could be a facebook friend to millions. And, of course. of course, like Zuckerberg, have a few enemies. Like me. And a few of my friends. The Unperson with Egg on Face goes to...

The media planner supreme – yes, senior level, who is unable to define creativity or grasp the fundamentals of planning in the digital age. The planner who, based on years of miscalculated experience, believes that creativity in media planning is about what you do on the contact point, solely. Execution. Not where. What.

The UnPerson for 2010 is the planner who uses and abuses the term 'engagement' – throwing tactical not strategic at the client and trying to win the pitch, the annual plan, the business based entirely on fancy circus trickery. Lo and behold, the banner that sings and dances on one leg on Yahoo. Watch her flip through the magazine and you can literally smell the aroma of your coffee – for she has discovered that one printer in Toronto who uses aromatic ink! Watch him use the newspaper belly band to belly dance at the pitch. Watch out then for what I call a crutch – a fatal dependence on execution. Sans any brainwork outside the proverbial plan excel sheet. Watch him hide same old same old behind a curtain of a touch screen mupi that has an augmented reality app built into it. Whoa!

Whatever happened to good old days? When planning was about reach, about target audience, and the power of frequency. Of copy wear outs and roadblock mapping? Why is there so much hue and cry about a facebook app with a game when the fundamentals of digital power – micromedia planning and thin slice targeting – are not in focus? How come these planners ignore Search and go for Destroy (the in-banner game) instead?

Why are media agencies becoming creative agencies with artwork and flash guys, with 110 slide presentations chock full of song and dance and no spine? Egg on face then to the planner who has forgotten fundamentals. Like Christmas built around Santa, the tree, Boxing Day sales and no Christ.

UnPerson then, to the dependent crutch clutching media personality. Walk. Try. Venture forth. Creativity exists in the world of the media agency – but it's creativity in the fundamentals, in the strategy, in the way you reach, dialog with, and engage people. And, no, you do not need Flash to do that.
Read more

# The Symbol of the Year

- on December 13, 2010 - No comments
The first decade of our new millennium is coming to a close, and one key on our boards has seen a massive resurgence across the world. It's the humble #. What we call a hashtag in twitterspeak. Ever since the @ sign became the most used key on every keyboard, no other computer keyboard key has ever had such a front stage showing.

According to an article in The Guardian highlighting the symbol, the official typographical name for the # is an octothorpe. While globally, it's called a 'hash', in the US, things are different. The yanks used to call it a 'pound sign'! But now, with twitter, every one seems to know what it is (a 'hash' of course), and how it's used.

The # is the absolute sign on twitter – a marker that allows tweets to highlight a subject, to group tweets together, to track them down or comment, re-tweet and so on.

So, as the year and the decade comes to a close, here's to the humble #hashtag and new lexicon in our speak. Here's to #twitter!
Happy 2011 and have a merry #Christmas.
Read more

Even the Navy's changing

- on December 05, 2010 - No comments
One of my all time favorite quotes is from Steve Jobs, Apple CEO and visionary. “Why join the navy when you can be a pirate?” It’s been a mantra around here, one I have used over the years to challenge our staff, inspire them about the possibilities of ‘digital’, and to have that one last awesome slide in winning pitches.

Pirates are quick, nimble bounty hunters. They go get loot, and lots of it. They’re romantic, they get movies made about them – and they’re pretty much an emblem for the ‘digital’ savvy, nerd, geek, entreprenuerally minded, i-Phone clutching new age guys. The new agencies. The guys who change the world. Guys who have 500 million friends. And a few enemies. You get the drift.

But not any more. The navy as we know it – the big advertising agency is about to change. Or has already, and you’ve blinked. In our industry (now is that advertising or engagement?) digital is no longer just a specialization. Digital is becoming core. No surprise there, because the very definition of mainstream media is changing. If people are spending more time and engaging in digitally driven activities, being social, searching, googling, texting, well, that’s going to redefine what’s mainstream. Does your target spend more time on facebook than watching tv? If so, is your agency properly equipped to communicate with and engage with that target? Or are they still turning around in big circles, not in high octane powered digital skiffs?

While there will always be specialists, always be catalysts who inspire and lead the others in the digital race, everybody today needs to grasp what digital is all about. The writer, the art director, account head, media planner – every one. And, vice versa. Those geeks, those digital savvy folk also need to understand how ‘traditional’ advertising works. Web content writers should understand copy writing for an ad. Digital planners need to understand GRP. And flash programmers need to understand consumer insight before making wow apps. Which means they need to work in one flow. One integrated solutions offering. One navy.

The big agencies that aren’t doing this are caught between the devil and deep blue sea. They’re themselves afraid of change, and they are standing back and watching the new ones, the nifty, nimble, new age engagement specialists steal valuable yardage. Yet, their inaction is what is the bigger fear.

Not that some of the agencies are not throwing digital into the mix. Digital is usually always on the agenda. In many cases it’s the last 20 minutes and 15 winning slides in a pitch. It’s there, but it’s a dummy. Unless digital is part of an integrated campaign, a real outcome, unless it’s driven through in the execution stage, what’s the point?

And the other big debate is what is digital? What are we really supposed to embrace? An iPhone app? A ‘like’ driver on facebook? A microsite? A blog? A tweet? Some of us seem confused. Let’s face it. In stark reality, it’s about using leading edge technologies and platforms to engage and interact with the consumer. And, in most cases, the more invisible the technology, and the more prominent the message and dialog, the better. Digital not as crutch or dependency, but as power, as catalyst.

Advertising is being redefined as we speak. The whole communications business model is shifting rapidly from mass media to micromedia for the masses. It’s moving from communications to engagement. From monologue and shouting to listening and dialogue. With user behavior tracking, deep insights available to us on individual likes and dislikes, it’s becoming more about individuality than about group behavior. More about you and me than about us as a demographic in general.

This means we need to understand the shift in how consumers are absorbing (or not) media. Trends like ‘snacking’ and ‘time-shifting’ are going to have a huge effect on media planning. The website as brochure and the banner as display are being seen as so 90s because today, it’s about how the consumer is controlling where, when and how they interact with a brand message – and how they’re reshaping that message, viralizing it, socializing it, or ignoring it.

We’re still in the ideas business, and we cannot forget that our business has always been about innovation. Decades ago, the VW Beetle Lemon ad was innovative. So is Jimmy Choo’s location based campaign today. The world’s second oldest profession isn’t going to be completely taken over by a Silicon Valley vc chasing a dotcom gold rush. The navy is still going to be around. But it’ll need to adapt.

Before I get blackburied by colleagues asking me to put my money where my mouse is, I’ll put my neck on the line. Yes, our agencies, are up for the challenge. We’re hiring pirates. We’re crowdsourcing. We’re turning vision into (augmented) reality. We’re recontextualizing at MCN. Yes. Even the navy’s changing.
Read more
Newer Posts Older Posts Home