Here in the Middle East, it’s a little slower on the uptake than what’s happening in the West, but brands today – powered by YouTube, facebook, twitter and even the blogosphere are becoming independent – and relevant – media channels by themselves.

Because, combined with digital production and planning agencies, brands are now increasingly aware of the power of combining owned, earned and paid media. They’re creating content and publishing it, pushing it across channels that they are able to create. They are hiring either creative talent within their own ‘marketing’ functions or are freelancing it out. Or getting agencies in to combine content and media – creating and masterminding editorial, written, video, audio and to-be-shared social and viral content.

This is probably because there isn’t enough good content in the market out there. Brands are increasingly creating and crafting what they want to say or want said about their brands, rather than depend on bloggers and independent creators, or even existing media channels. So, a fashion brand may create their own ‘how-to’ content for a YouTube channel, rather than depend on, here in the Middle East, a Yahoo Maktoob…
Read more 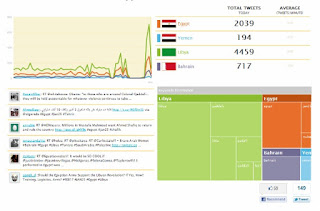 This is coming from Al Jazeera, and yes, we’re here in the Middle East. After having heard for years that we’re kind of behind everything (including walls of censorship), here’s something that is kind of new, and very much a first-ever from a traditional news channnel that is broadcast (or tradional media) based.

The dashboard tallies the daily number of tweets about developments in each listed country (the site is currently tracking Egypt, Yemen, Libya and Bahrain) and shows the average number of such tweets per minute for each country.

Without a doubt, Al Jazeera were the world’s eyes and ears for the many uprisings that have swept across our part of the world. Often fueled by social media and fanned by thousands of followers across the world, the uprisings were uniquely covered by the Qatari channel – and covered well.

The dashboard provides a quick view of from where and how people use twitter to discuss uprisings in the Arab world. A kind of mash of geographic location and emotion tracker.
Read more

- on March 05, 2011 - 1 comment
Tunisia. Egypt. Libya. Yemen. Iraq. Oman. Bahrain. Algeria. Morocco. Jordan. What sounds like a list of agency locations across the region is really a country by country trail of the Arab uprisings of 2011. It all started in a small Tunisian town and fueled by the Arab youth’s power to communicate, build momentum and gather information and disseminate rhetoric via the internet and on the street until it became a tumbleweed of a game changer. Often, heads of states have fallen, and in others, change of governments or of those wielding power at ministry levels have been brought on by the people in the squares, on the streets.

It took one frustrated, angry vegetable seller in Tunisia who set him ablaze to usher in the ‘Jasmine Revolution’ in Tunisia – the kick starter. Then, in nation after Arab nation, the youth armed themselves with mobile phones and computers, and brought down the power of the gun toting mighty. The pen vs the sword. And the pen (or mouse) won without fail (even as we’re watching what’s unfolding in Libya).

For the first time, collectively at least, this part of the world has woken up to the power of social and political mobilization via social media. One ‘protester’ from Egypt told me how ‘yet another time America had helped change the goalposts in the Middle East’ this time without flying in troops and tanks. “After all, twitter and facebook are American” he explained. I’ve known Bassem (name changed) for a few years. He has been fiercely anti-American. This time around there was almost a quiet acceptance of a helping hand in the form of technology.

Social media and technology of communicating beyond the print and broadcast media is enabling freedom of speech to levels unprecedented in the region. “People are creating their own channels, most of which are beyond any censorships” observed Fadi Salameh, CEO at MCN and a media guy at heart. “I believe this may change where and how we target these demographics as media planers, down the line when everything has settled” he added.

And one more. With all this grasping of the powers that reside between the tweets and the facebook posts, I wonder (and frankly fear) the Sword of Damocles that the powers that be at these social media HQs will face. How will this freedom of speech, open channel networking, and the absence of censorship or control stand up and be counted when (and not if, is my fear) it’s used by the ‘people’ on the ‘wrong side’? After all, freedom of speech and social media can be radicalized. 140c at a time.
Read more
Newer Posts Older Posts Home