The tv watching experience is getting richer, better because of online? Rather than killing off tv in the living room, digital channels are adding to it, and broadening the perspective.

Consumers in the Middle East today are increasingly using multiple screens and devices while consuming media. With the boom in high speed access and the popularity of both tablet and mobile, people today aren't just watching tv. It's a combination of lean back (tv) and lean forward (tablet, mobile, laptop) in the living rooms of our region.

Multi screen marketing isn't new. But it's developing into a huge, synergistic platform where not only the message across what you watch on tv syncs with what's on your website, it does so at the same time, and with planned, timed and well-executed intent. We've always put an URL at the end of the tv spot, but now we're beginning to put in a Facebook address, and more often a Twitter hashtag. The twitter hashtag is to encourage immediate participation in sharing, in dialog, in comment fishing and more. In the UK, almost 70% of brands reviewed in a survey encouraged multi-device participation. And here in the MENA region,we are seeing the beginnings of it.

Twitter themselves commented in January 2013 Twitter and advertising report which stated, "simply adding hashtags on air - or in ads - helps organise and steer the conversation."

The Twitter report goes on to say, "in advertising, we're seeing that deeper integration of Twitter not only drives discovery and engagement but also drives increases in brand recall scores and other marketing goals." Twitter's increasing popularity and acceptance as a "code-sharing" medium with TV is linked to the open field nature of the microblog. It's so in the now and the instant. I watch a tv program, or a spot, and instantly am able to share my viewpoint using a hashtag (#) – and it's there for anyone to see. It's a bit more open than the Facebook walled garden where only my 'friends' can see what or react to my opinion. Red Bull in the UK did this very successfully with their #GivesYouWings campaign.

What's even more interesting is that in a multi-device, multi-screen scenario in the living room, consumers tend not to get up and walk out during a commercial break. They stay engaged and busy, and connected. This works particularly well in "native" or "content marketing" campaigns that tend to want to engage the viewer in every possible way.

Just adding a #Brandname at the end of your spot is not the way to go. The #whatever should be about the campaign, about the call to action, and about what you want the target audience to do. Using a slogan like Red Bull did in #GivesYouWings is the way to go. And multi-device or multi-screen marketing is not just for brands and products. This year's SuperBowl viewers generated 24.1M posts. During power outage, nearly 231,500 posts were generated per second, making it one of the most talked about moments during the game. The Grammys generated just over 14M tweets  (the equivalent of 67K per minute) during the broadcast.

TV as we know it, is quickly evolving and becoming a larger experience. With multiscreen video, sharing, tweeting, in-the-instance interacting tv is becoming infinitely richer, increasingly interactive and delivering deeper levels of engagement.

The tremors in Dubai. Are we earthquake proof and evacuation ready?

- on April 16, 2013 - No comments
Yesterday at 2.45 pm a strong 7.8 magnitude earthquake hit Iran – the worst the quake fault riding nation has seen in 40 years. And we felt it across the UAE, and particularly here in Dubai. Our high rise office building – MCN Hive – had to be evacuated to follow safety procedures. But...

Do we really know how to "evacuate" a building here in Dubai? The climb down the stairs for us was scarily, painfully slow. The way blocked by facebooking-and-tweeting-on-their-iPhone divas who found the climb down in their Louboutins both hazardous and hilarious. There was no sense of emergency. Sure, there is usually no need to panic – which is the worst reaction – being calm is both important and Mad Men "cool". But, one does take off one's 6 inch heels, right? 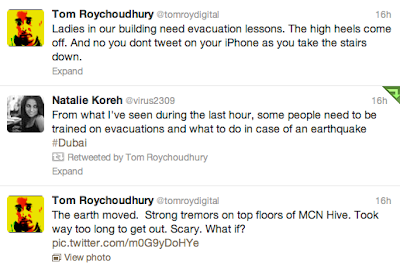 Today's Facebook timeline is filled with funny posts on people's reaction to the quake. Dubai is a here and now city. Folks seem much more in a hurry to crash through a Tiesto concert gate than run for cover in a situation. That in itself is shocking. Perhaps a little bit more shocking even than the intensity of the quake waves when they reached Dubai. According to seismologists, it had watered down to about a 4.5. That for Dubai is probably just a Harlem Shake. And a bruised Louboutin heel or two.

Seeing with Sound: How Listening is crucial in Business

- on April 09, 2013 - No comments
When a business, a leader, a mentor isn't listening, it's difficult to fight corporate blindness. If you're corporate blind, or lacking in focus and vision, try listening. There's a wonderful story on 'echolcation' or seeing with sound as mastered by Daniel Kish, who founded World Access for the Blind – and I saw an immediate allegory and a lesson for us all in business...

The Weekend Review in Gulf News of April 5, 2013 did a great piece on Daniel Kish – who travels the world over working with the visually challenged. He guides them in developing "seeing" strengths through a technique that enables them to navigate using sound and to find the freedom to do  what they please. The story is amazing. Kish was born with a rare form of cancer that robbed him of his vision. But he developed his mastery of echolocation – a technique that's also used by bats and dolphins for navigation! Essentially, it's about using sounds instead of light.

It's an amazing feat for Kish who has helped thousands of blind folk function with freedom of choice – all by listening to sounds. What if there's something to learn from Kish and the art of echolocating in our world of business? How often we get blindsided by instinct, by judgement, by lack of vision (read, blindness) in our world of business, or even everyday living. What if, then, we could use 'sounds' or 'feedback' to improve our vision, to guide our line of sight, and help us focus better?

"Sound waves are similar to light waves that carry energy and are reflected off surfaces. When that energy returns to the observer, the brain captures the patterns of the reflected energy and is able to extract information about the physical surfaces (distance, location etc)" says Kish about his overcoming the challenge through echolocating. Imagine, if we kept our ears open, and listened. Listened to what others have to say, listened to their opinions, their feedback, their criticisms and their praise – wouldn't that really help us see the world around us better?

In some ways brands have been using this in social media – listening to the collective voices of the consumer, the customer, trying to understand the echoes, the chatter, the reflected sounds. If we apply this same science (or is it an art?) to our everyday business, our everyday lives, wouldn't that help us tremendously in understanding how we are being perceived, understood, interpreted and positioned?

If only we are willing to ask for feedback, to have our ears open, our auditory receptors on max, it would be such an immense improvement of our vision, our sight, our way of seeing the world around us. And what a wonderful world that would be.