Live From Tahrir Square: What Egyptians Are Tweeting Today 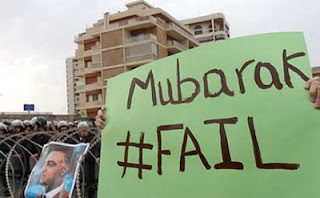 Well, they got @Sandmonkey this morning. The Egyptian micro-celebrity and blogger Mahmoud who goes under the handle Sandmonkey was put in a cage, arrested. Not much of a surprise, and a bit too late. He’d already got the word out, tweet by tweet, video upload after another, and he had done enough social damage to #Mubarak. He moved the dictator towards #epicFail. As the internet opened up a little, protesters were tweeting live from the now legendary #Tahrir Square. And the world is following. Most related topics are trending on top 10 as I post, in the U.K., in Canada, and in the US. One way or another, one hashtag or another, #Jan25 and #Egypt is captivating tweet.


The world is watching in awe as social media is playing a small but significant part in tearing at decades of repressive regime. In London, #Jan25 is higher at No. 2 than the happier celebratory #Kung Hei Fat Choi for Chinese New Year. In India the topic holds four of the top 10 slots. I read on a tweet that more people are following the Egyptian revolution on social worldwide at any given time than on TV. The revolution is not on television! Social is helping today’s frustration, anger, and resentment amongst the literate youth be voiced with a loudness unprecedented. And, hush, but a little bird says that the power of social is kindle, waiting across many a Middle Eastern flashpoint. Scary.


In Egypt, friends are now being able to contact us. They’re telling us how the entire narrative, the tide was turning one way, then another, mostly in a well mannered way using the power of next gen media. Groups are organizing quickly. Information was being passed, bloodbank requests were being RT’d and doctors responding. And Washington was being beckoned to action. The world was being told. Minute by minute. My tweetstream on #Jan25 is flowing so fast, I simply am unable to catch any of it. The news channel Al Jazeera is running a live Twitter feed on their portal. Uploads are flooding YouTube, and #Jan25 is getting thousands of likes on Facebook. For once, an entire world is following a revolution 24/7. This is huge.

However, saying it’s a social media revolution would be belittling the hundreds wounded and scores who have given up their lives. This is not a revolution about armchair or laptop protesting. It’s not about ‘leaning back’ (watching it on tv) or ‘leaning forward’ (participating via laptop). It’s out on the street. It’s being written in blood. Young and old Egyptian blood. But as our friends from Cairo tell us, social media, and channels like Al Jazeera are playing a significant role amongst the urban youth who have mobiles, who have access and who know how to ‘like’ and ‘hashtag.’ And Mubarak’s people know that. Armed with knives and guns, they are raiding Liberation Square, moving in out amongst the pro-freedom protesters, spreading panic, inciting violence. Because they know that the people are armed with courage, and determination–and support and empathy that’s growing by the tweet, by the second.

Breaking: I just logged on to http://www.sandmonkey.org/. And got: Error establishing a database connection. That’s yet another RT of Mubarak#Fail.