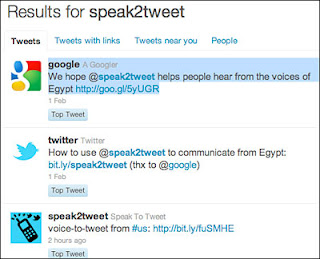 From my blog published on Advertising Age/Global News:


DUBAI (AdAge.com) — It’s happening in Tahrir Square, it’s happening in Alexandria and it’s unfolding on Speak2Tweet. The revolution in Egypt is not on TV or radio, but tugging at Mubarak 140 characters at a time.

For the first time (since Iran’s Twitter-fueled uprising was “socially sidelined” because Michael Jackson died and hashtag Michael Jackson — #MJ — became much more popular than hashtag IranElection — #IranElection), social media is standing up and being counted in the Middle East. During the earlier Iran uprising, as protests were being mobilized and heralded on the microblog, the U.S. State Department asked Twitter to postpone a scheduled site maintenance that would have shut down the most powerful communication tool for protesters in Iran. Today we are witnessing another uprising, this time far more serious, and far larger in scale. Here in our region, social media is becoming a channel for freedom of expression, for change, and it is being recognized — even hailed — as a human right.


As the Mubarak government turned Egypt into Gypt (everything “e” was cut off), Twitter quickly joined hands with SayNow (a Google company, yes,) to work around the ban and created @speak2tweet. This amazing new “channel,” created for the people of Egypt, is a game changer. It allows for anyone with access to a telephone line to leave a voice message –- which is instantly converted to a tweet.

And what’s really sweet is that it all came from official sources. The top tweets about @speak2tweet were from Google and Twitter, not from some nerd in a back office in Cairo. And the people of Egypt aren’t going to forget that in a hurry. In the past, Egypt has been called Facebook Nation, for the times that general strikes have been organized and mobilized using the power of social media and the popularity of Facebook amongst the young, urban population in Egypt.

This time around, Google and Twitter are the leading facilitators. A joint statement coming from SayNow and Google MENA said “Like many people, we’ve been glued to the news unfolding in Egypt and thinking of what we could do to help people on the ground,” and added a strong note of support with “We hope that this will go some way to helping people in Egypt stay connected at this very difficult time. Our thoughts are with everyone there.” Wow. Well done social.

I managed to connect with Ahmed, one of those Egyptians who’ve grasped the power of the importance of free expression. He said, “It’s not religious, it’s not political. It’s social. Today, I don’t care if you’re Muslim or Christian, today I want to know if you’re social” (meaning if you are able to connect via a social media channel and spread the word).

As I post, my Twitter feed is continuously showing voice tweets coming out of Egypt. It’s very early morning there on Thursday, Feb. 3. The vigil is continuing, and some of the pro-Mubarak supporters (apparently organized and rustled up quickly by the government) have opened fire, injuring several in the pro-freedom crowd. It’s beginning to go south. Violence is flaring.

I’m keeping up with the news, tweet by tweet, live from the square. I’ll post a couple here. Then I’ll have to go work. Write up yet another presentation for a pitch selling the power of social media. For a fast moving consumer goods client. But, for now, from #Egypt:

#egypt #Jan25 Just saw a protester hit by a Molotov. Saw him catch on fire. Other protesters managed to put him out.

We just knew that one of the demonstrators just died from live bullet shot by the NDP thugs here in Tahrir Sq. #Egypt #Jan25

Just witnessed a guy getting shot in the head. On Al Jazeera. In Egypt. #jan25

And a call out to the US of A. Thugs waited until west asleep to attack! CALL US state department to condemn use of US weapons to kill Egyptians 202-647-4000 #Jan25 #Egypt

Great post!!Thanks for sharing it with us....really needed.Rademan is a creative digital agency that helps with the growth and prosperity of businesses through digital media. Knowledge, experience, creativity, expertise and, most importantly, pragmatism are part of our feature.
خدمات سئو