Mobile. One in Five in the world today access web via mobile. The new First screen!

If someone told you that one-in-five of people online would access the web via a small, hand-held device a few years ago, you’d laugh. The mobile phone has come a long way – thanks to advancements in screen tech, access, smartphone adaption, and of course, changing media consumption patterns. We believe that you can’t really call it the “third screen” any more in the line-up of one, two, three (one being tv and two being the computer screen). More andmore people are reliant on the internet for their news, their entertainment and their social lives, And mobile is showing them the way.
Mashable reports: People around the globe are accessing the web via their smartphones more often than ever. So far in 2013, 17.4% of web traffic has come through mobile, representing more than a 6% increase since 2012 when 11.1% of traffic came from mobile.
Statista’s chart below shows the increase in mobile web traffic over the last year, broken down by continent.
Mobile web traffic more than doubled in South America, the continent with the largest growth rate, where web access via mobile leaped from 3.2% to 6.8%.
Asia and Africa lead the planet as the two continents with the most-mobile web users, with 26.6% and 23.7%, respectively, of web traffic coming from mobile devices.
Image courtesy: Mashable report 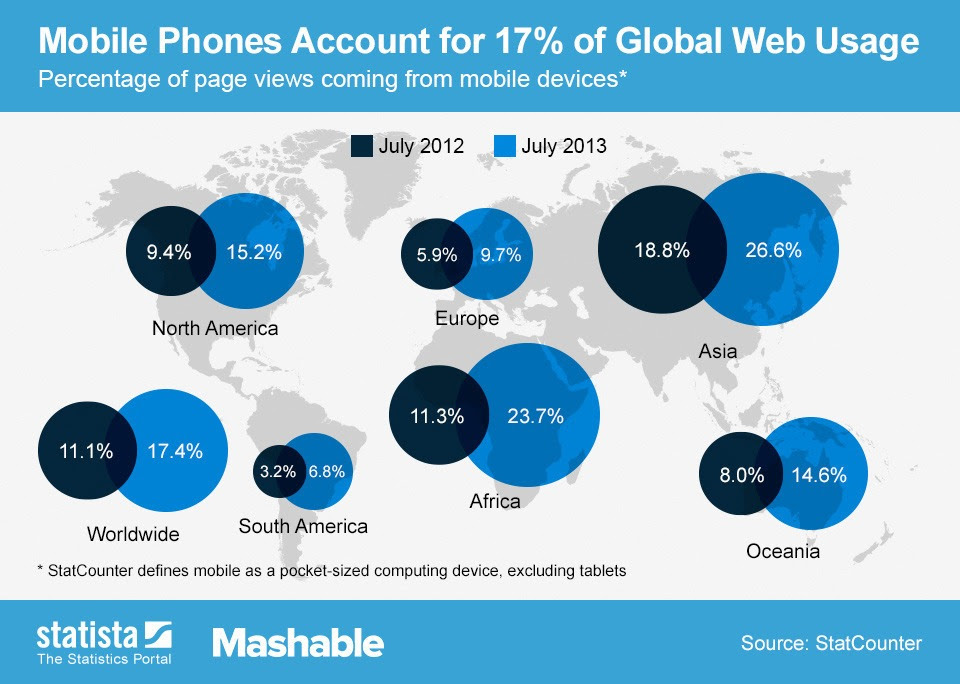