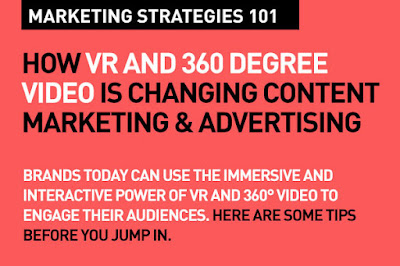 Brands and content creators need to know that today's content hungry and tech savvy consumer is hugely interested in VR. Global search interest on Google grew by nearly 4X in the last year. And Google are doing a great job in empowering this new technology. Google has shipped millions of Google Cardboard viewers to help bring the VR experience to everyone. As have many other brands like Etihad Airlines and Volvo recently.

Google says that the "technology has the potential to change our daily lives—from how we communicate to how we spend our leisure time. It's early days, but it's already happening, and now is the time for brands and creators to understand what it all means." While Google Cardboard was an initial step, Google's new VR platform "Daydream will enable even more powerful, mobile, high-quality experiences with a headset that's comfortable at an accessible price."

Google says that the "promise of VR is what the industry calls "presence"—the feeling that you're really somewhere else. VR cameras like Jump can capture the entire experience of a place—every corner, every angle. In the not-so-distant future, cameras like these will be capturing experiences all over the world. What does this mean for audiences? How about access to the best seats in the house at any event—floor seats at the NBA playoffs, a box at La Scala, front row at the Beyoncé show?" Imagine how this empowers brands for their content marketing initiatives.

Google already has made impact with 360 degree video. "Viewers can see video from every angle just by swiping or moving the phone or tablet around—with no headset required. Uploads of 360-degree videos continue to grow and have doubled over the past three months. Brands are forging the way, using 360-degree video to film big events or get creative with ads. BMW used this technology for an ad featuring a 360-degree car race. The "School of Rock" musicalcreated a 360-degree music video. AT&T simulated a car crash to drive home its phone safety message."

Virtual reality takes the 360-degree video experience a step further by adding a sense of depth. When viewed with a VR headset images become three-dimensional, which adds to the feeling of immersiveness. On top of that, spatial audio lets people listen to audio from all directions, just as in the real world. That's what drives interaction and therefore engagement.
For content creators, the potential of 360-degree video and VR is immense, but it'll require a shift in thinking. VR lets viewers be active participants; they can look wherever they want.  This makes VR and 360-degree video an incredibly powerful tool to create empathy. When a viewer feels like they are there, they have a greater sense of the situation. Messages become more impactful."
Google reminds us that on YouTube, creators are using the medium to create truly transportive experiences across sports, news, education, and fashion. The New York Times puts viewers in the shoes of displaced children around the world. Virtual field trips let teachers take students places a school bus can't. Fashionistas can get a front row seat at the latest runway shows from Jason Wu, Hugo Boss, and Dior.

Virtual reality is no longer a novelty. It has real applications for brands today. But is it worth pursuing? And will it make sense and add value to your target audience?

As in any aspect of digital marketing, Customer or Consumer Insights is your First Step in Digital Marketing with any video content you create. Google suggests brands examine the potential first in their post:

Here are some questions brands should consider before investing in VR technology according to Google:

Will VR give viewers an experience that they otherwise couldn't have? The subject matter should truly take advantage of the medium—transport people to a place, immerse them in a world, and compel them to explore.
Could you give shoppers a better feel for your product? According to a study from Ericsson ConsumerLab, shopping was the top reason worldwide smartphone users were interested in VR, with "seeing items in real size and form when shopping online" cited by 64% of respondents. This doesn't just apply to retail brands. Cadillac is already using VR to create virtual dealerships.
Will your recording environment be rich with things to see? If you're shooting in a simple white room with nothing on the walls, probably not. If you're at a sports event or a music festival, there's likely plenty to see.
Will viewers want to continue watching beyond the initial "That's cool" moment? It can be a challenge to get viewers to stick around after a minute or so. Make sure you have a compelling hook that will keep them engaged.


Winning Content Strategy: Always share something valuable and useful. No matter how cool your content is formatted – using 360 video or VR, if it does not provide value, it's just not going to work.
And that's the basics of digital marketing strategies. That's 101. Please share this post with your friends and colleagues today... And do comment if you feel you want to add to this.
More reading on 360 video and content

Very useful and insightful post. Thanks. This is certainly the future but happening today. We need to be aware of such changes.

With video being such a favourite content format for today's consumers, these additional layers of virtual reality and 360 degree viewing only adds to the experience and makes the possibility of better content and better engagement with brand messaging far more easier to develop. Good post.

Thanks for sharing this articles.. for more visit http://www.s4techno.com/blog/category/digital-marketing/ ..its really very nice..

With new 360 degree cameras, brands and agencies should really make use of technology to create interesting content

Thanks for sharing this informative information. You may also refer http://goo.gl/cTKM5d for more details...

It’s crazy how much VR and 360 have already changed marketing. To be honest, I didn’t really think it would take off. But I’m glad it has! Just saw a VR ad the other day for the new Beauty and the Beast movie that was pretty awesome.