- on September 23, 2012 - 1 comment
Advertising Age from New York have released their rankings for agencies who did best in their mobile marketing efforts in the US market... Two of the agencies are from IPG. Although mobile hasn't quite taken off as we all expected from a revenue share point of view, it occupiues a huge space in the mind of today's consumer. 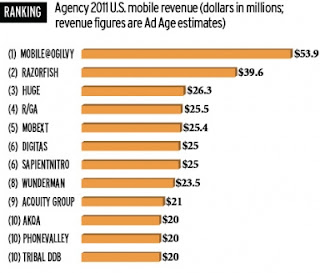 The smartphone, now carried by nearly half of all Americans who own a mobile phone, is a computer, a camera, a map, a compass and, for a small-but-growing number, a wallet.

According to Ad Age it all points to the possibilities of Mobile e-commerce. "While widespread use of the mobile phone to pay for things seems a way off, the phone is now dictating buying decisions as much as any devices before it. Consumers are using phones to comparison shop in stores; they are using them to consult reviews on products, services, hotels and restaurants; they are using phones to tell their friends where they are and what they'd like to do. Oh, and they also buy things. Even more than the PC, the phone is a transaction device, so it should surprise no one that search advertisers dominate in mobile."

And, it's a Two-platform world... While smartphones boom, two platforms are becoming dominant: Google's Android and Apple's iOS. Meanwhile, the once-huge BlackBerry is declining precipitously from more than 23% market share in June of last year to about 10% today with nothing in the pipeline that promises to slow down its decline.